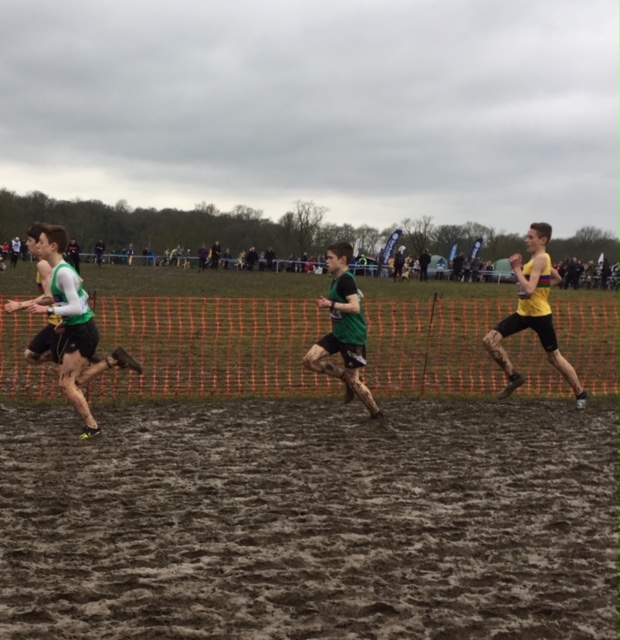 To cap a spectacular personal season, William Rabjohns – having already won the two required qualifying British Cross races – won the Final race by 6 seconds on a very muddy course at Loughborough on March 10th. In so doing he also won the CAU Inter-Counties title for Dorset. Ten other PAC Juniors and three Seniors raced for Dorset in this ten-race meeting. The best Dorset team performance was by their u15G team which included Emilie C and Ashia W among the scoring four. They ranked 11th of the 42 teams. The results are here >>

In the British Masters’ Indoor Championships staged at Lee Valley on March 10/11, our two main HJ coaches performed near their best in achieving two medals. In the M40 section, James H won with 1.90m, setting a new Championship Record! Mark R took the bronze in the M50 event with 1.50m. It just proves that they CAN demo!

Also on the weekend March 10/11, Adam B competed in the EA u17M Combined Events at the EIS in Sheffield. On Day 1 he set new indoor PBs in 60m, LJ, Shot and HJ. He followed this with two more PBs in 60m, Hurdles and PV – amazing improvements!  By the last event (1000m) fatigue hit but he still set a new indoor Club u17M Heptathlon record with a points total of 3655. That’s work!

He also won a silver medal for his Midlands/SW ranking!

Postponed from March 3rd due to snow! Results not yet available.